I’ll be honest, K.A.R.D’s second pre-debut single (how is that a thing? why is it a thing?) wasn’t my favorite at first listen. Heavy synth and frequent auto-tune aren’t typically my go-to sounds when I want to listen to something—but “Don’t Recall” grew on me quickly thanks to how well those sounds built upon the underlying beat and the interesting melody. 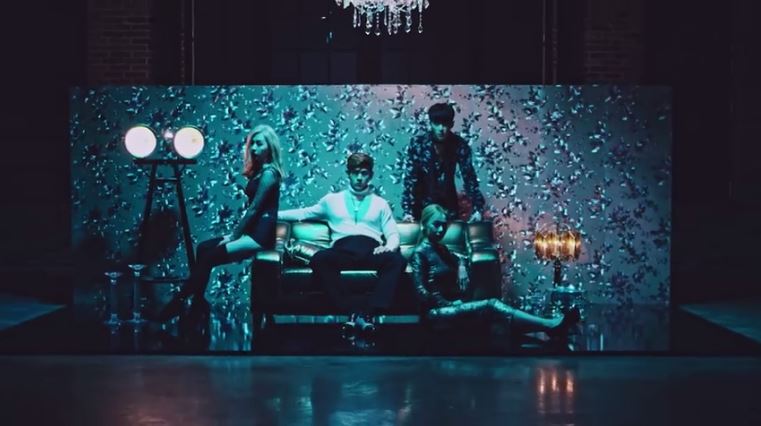 One of my favorite things about “Don’t Recall” is how well the different sections of the song transition into each other while still being distinct. Especially the rap verses. A bad rap section will kill a song’s momentum, but the raps in “Don’t Recall” were engaging and didn’t sound like they had been spliced in as an afterthought.

Another great thing about this song is how the call and response plays out. Even without the subtitles up (or the English version of the song with all-new lyrics), the back and forth between the men and the women was obvious. The men are insistent that they can get back together; the women want to leave the past where it belongs:

Don’t recall when we were good together
Haunts me like a ghost
Like there will be no tomorrow
Heart-pounding moments
(No no no no no)
Don’t mean a thing anymore
Stop, I don’t recall.

While the dance often does a good job conveying the back and forth between the two sides, the music video is a letdown at some points. In some shots, the MV looks pretty cheap/last-minute instead of artfully minimalist, which is what I think they were aiming for. Better styling on the guys’ white outfits would have helped, and the swirly colors cube should have been ditched in favor of longer dance segments.

Regardless, K.A.R.D. is doing pretty damn good for itself, what with over 13 million views on its second unofficial song. Here’s hoping their actual, eventual, debut is just as good, if not better.

Buy Song on iTunes || Buy English Version on iTunes
The above links are affiliate links to iTunes. By purchasing through these links, you help support this blog at no extra cost to you.