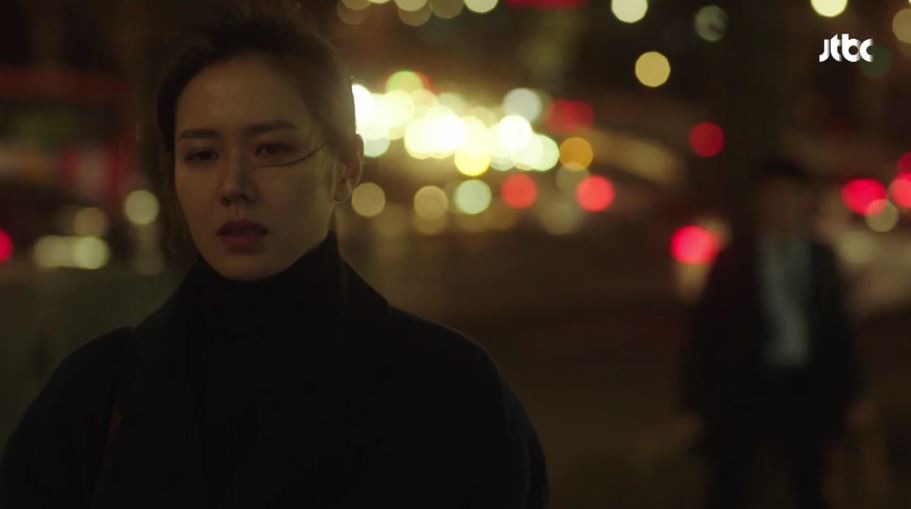 I am over Kyu-min. To be fair, pretty much everyone else in this show is over him, too, with the exception of Kyu-min and Jin-ah’s mother (more on that later). He was tiresome in the last episode when he (mistakenly) believed that mutual cheating balanced out and that meant he and Jin-ah could get back together; he is especially tiresome now that he’s hunting down Jin-ah’s friends to complain about the blow to his ego.

And he’s made that explicitly clear—he’s taking the break up so hard because it is about his ego. Kyu-min looks down on Jin-ah. Her family and education aren’t on par with his, and he is drunk and angry and bitter that she won’t take him back when clearly he is the best that he thinks she can do. I want this man gone, but unfortunately, DF shows a brief summary of the next episode, so I know he’ll be here for at least one more. Can he please get hit by a car for real?

In related news, I am extremely upset at Jin-ah’s mother. In the last episode, I was thrilled that she took Jin-ah’s side in the immediate aftermath of finding out that Kyu-min cheated, but I don’t think I’ve ever gone from a YAY to a FUCK YOU so quickly. Internalized misogyny is alive and well—how dare you tell Jin-ah that if she had been better to Kyu-min, he wouldn’t have cheated? Is that what your mother told you when your now-husband cheated? I’m pissed that she would blame Jin-ah for Kyu-min’s infidelity, especially since her screen time makes it clear that she sees Jin-ah’s unmarried status as a blow to her ego. All of her friends’ kids are doing the getting-married-into-good-families thing, and she’s embarrassed by her daughter. Not even walking it back with a “I know Kyu-min was 100% wrong, but—” is enough to cool my rage at her. What is your goal here, exactly? To have your daughter settle for the kind of marriage you have?

(Side note: There’s nothing overtly wrong about Jin-ah’s parents’ marriage, for the record, other than I have an extremely low opinion of her father, who seems to be doing absolutely nothing in his retirement while her mother continues to do all of the day-to-day tasks of running the household. If you’ve got enough free time to practice foreign languages via cinema, can’t you help your wife out with the grocery shopping or cooking? I nearly snarled at him when he suggested different food after his wife doted on him, but at least she took care of that for me.) 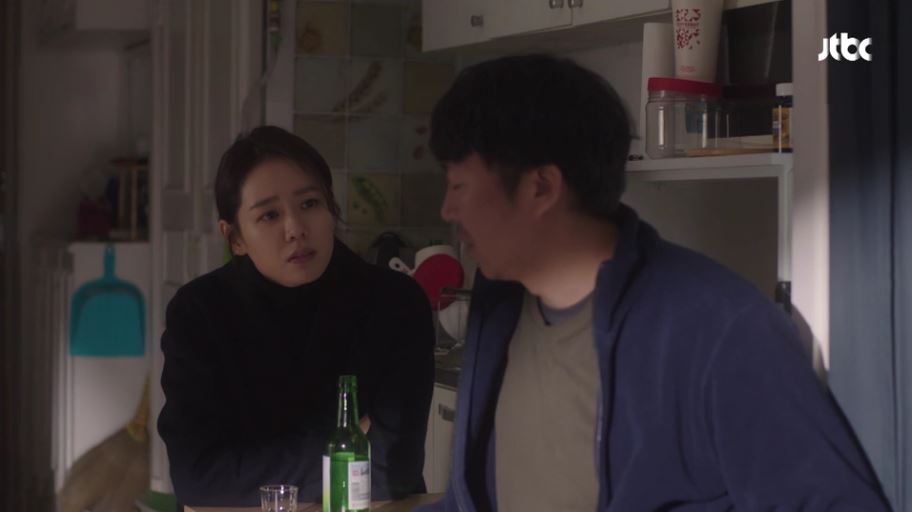 In slightly less rageful news, things are looking up for Jin-ah at work. While I question the decision to send a manager to someone who is threatening litigation instead of a lawyer, I’m glad that it gave Jin-ah a chance to, well, manage. She is good at her job, and it was nice to see her handle the franchise owner so he felt his grievances were heard and was willing to back off on the lawsuit.

And more importantly, it gave Jin-ah the chance to open herself up emotionally about the shitty place her life is in right now.  She could vent to the franchise owner in a way that he couldn’t pry deeper into her life, which made him a safer choice than Kyung-sun or anyone else. We got to hear more of her thoughts and see more of her hurt, and that was an important step for the development of the romance. Jin-ah is far more accessible to the audience because of it.

Also, major points to Jin-ah for realizing that there was no way Ho-kyun got the company to pay for the promotion fiasco on his own. (The man is devious for waiting to have the conversation until there was a witness so he could get praised for it, for the record.) I was thrilled that she went straight to Young-in and thanked her for intervening. And you know what? I’m even more thrilled that Young-in said she doesn’t help just Jin-ah. In my heart of hearts, I want to believe that Young-in is just quietly being competent in the background, making sure that all of the ladies on the front lines don’t get screwed over by male management—and that they get credit where credit is due. I loved that Young-in recommended Jin-ah to oversee the reboot of the troublesome franchise as that sets her up for some major points at work. Talking a troubled owner out of a lawsuit, and then turning that owner’s store around so it’s profitable? Young-in is setting up Jin-ah to score a major win, provided Jin-ah can follow through. What an amazing boss to have. (Don’t fail me, please.) 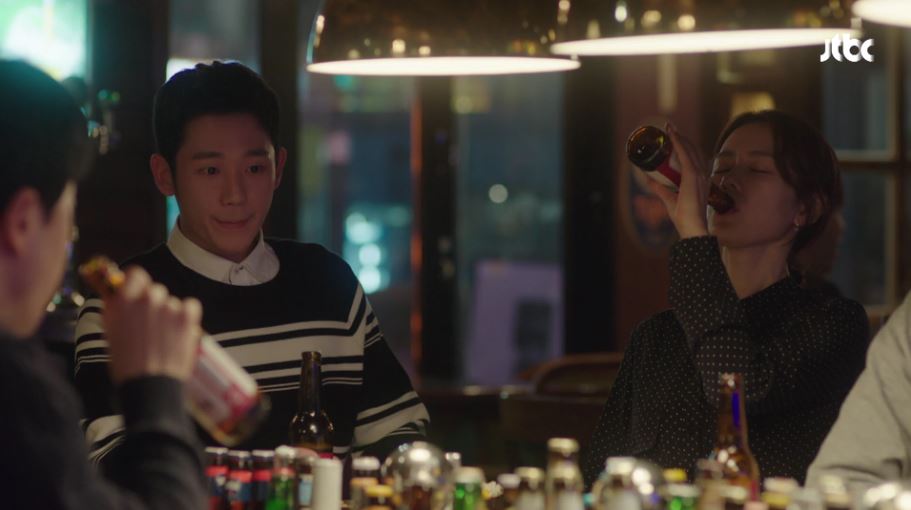 The romance this episode had its ups and downs. I’m not a fan of Joon-hee jumping on the let’s-blame-Jin-ah-for-Kyu-min’s-actions train. Exactly how is it her fault that Kyu-min won’t listen to the ridiculous number of soft and hard no’s she has given him? She hasn’t been ambiguous with him at all in my book. Like, when he was drunk and screaming at her, she slapped him, and then she called his bluff when he threatened to throw himself in the street if she wouldn’t take him back, and he still ended up shouting at her that he’ll make her have a change of heart while she walked away from him. It’s not her fucking fault he won’t take no for an answer. So keep your unhelpful and victim-blaming thoughts to yourself, Joon-hee.

All of that aside (and that’s a big aside), this episode was all about misunderstanding and miscommunication and mistimed events, and they did that really well. I don’t think Se-young is intentionally stirring the pot because she doesn’t seem to realize that Joon-hee and Jin-ah have feelings for each other, so part of me is all yes, go after that hot boy, make your move even though I know it’s doomed from the start. I’m just praying that she takes her inevitable loss well because there are few things I dislike as much as girls fighting over a boy.

It was really nice to see that Jin-ah isn’t the only one having doubts about whether or not to act on her feelings. Joon-hee chickened out several times this episode, too, and I appreciated that about him. (Their not-a-date dates were very cute.) It’s nice to have a guy who doesn’t believe that the woman he likes will fall swooning at his feet the moment he shows romantic interest in her. It’s nice to see that he’s worried about being rejected.

But most importantly, I loved that it was Jin-ah who finally got up the courage to make her feelings clear. That under-the-table hand grab was made all the more delightful by Joon-hee’s shocked understanding at what that gesture meant. Plus, cute hiccups!

I’m a little surprised that we didn’t even make it to episode four before the romance officially started, but hey, I much prefer romances where the couple gets together early and then teams up against the world together than waiting all the way until the second half of the show to get on the same page. Just don’t ruin it for me with noble idiocy and/or pointless separation at the three-quarters mark, all right?