I’ve got one new drama for you this week, and it involves three men and a baby. I’m not currently in the mood for comedy, but is it on your watchlist? 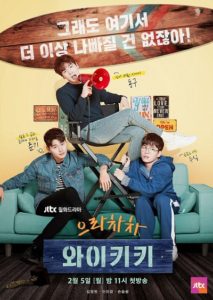 When a single mother and her child arrive an Itaewon guesthouse, they upend the lives of the three men running it.

Kang Dong-goo used to be a celebrated director, but his career has since gone downhill. Even though Chun Joon-ki barely scrapes by on his supporting actor roles, he dreams of hitting it big someday, like his celebrity father. Meanwhile, Bong Doo-sik wanted to become a popular screenwriter, yet he winds up having to freelance for other people in order to survive. The three of them decide to go into business as guesthouse owners—and they quickly find themselves just as unsuccessful and on the verge of financial ruin. However, when Yoon Ah shows up with her child as the newest residents, the three men decide they have to keep the guesthouse open.