I’m delighted to have Lee Bo-young back on my screen in this 2010 remake of the jdrama Mother. Here’s hoping it goes well! As of the moment I’m writing this, I don’t know who officially has the license. Viki still had a fan page as of Saturday, but DramaFever had a  page with a “Coming Soon” banner on it. Guess we’ll find out. Will you be watching it? 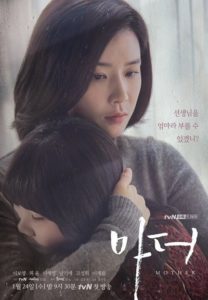 While Soo-jin is working as a temporary teacher at an elementary school, she notices Hye-na, one of her students. Hye-na stands out because of her odd behavior and unkempt appearance, and Soo-jin finds out that Hye-na is being abused by her mother, Ja-young. So when Soo-jin finds Hye-na alone outside, she decides to kidnap Hye-na in order to protect her and become her new mother.

This show is a remake of the 2010 Japanese drama of the same name.