TL;DR: This episode actually made me swoon twice, and yet I also had a big NOPE moment, too. Well, I guess I can’t get everything I want all the time. 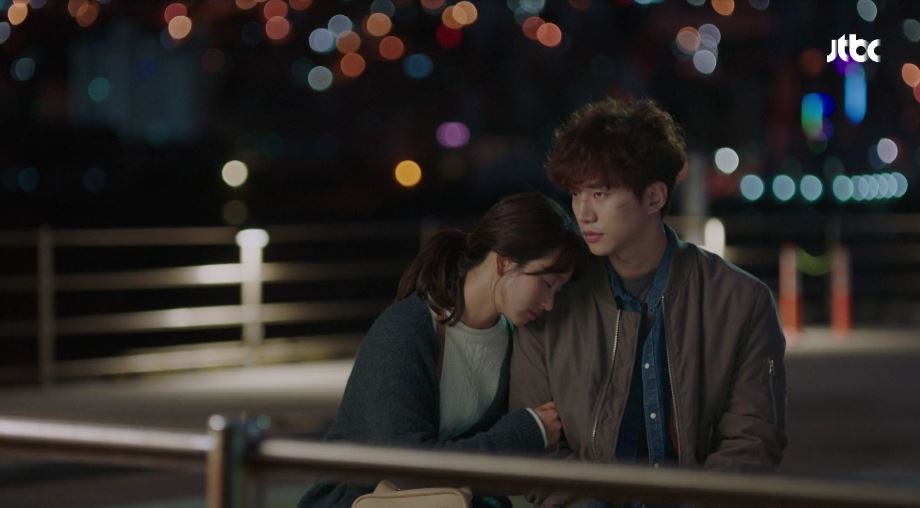 There are so many great things happening between Moon-soo and Kang-doo right now, and chief among them is their mutual concern for one another. When Moon-soo couldn’t reach him all day, she was so worried about him she checked up on him at home. And why was she looking for him in the first place? So they could visit the ossuary together, and so she could apologize for letting him find that woman’s body all on his own.

What I love about this is that Moon-soo isn’t the only one pouring effort into their relationship. Kang-doo returns her concern and effort, from grabbing her hand (not wrist!) so they can run and catch the bus to rearranging their meeting with a family when he saw she was crying. (Well, that’s my guess, based on his shifty eyes.) He tried to give her a day of fun at an amusement park instead, and the fact that he noticed and cared enough to make arrangements to help her blow off steam was lovely.

What was less lovely was when he grabbed her and yelled at her…about her needing to yell more and not insist on being fine. Look, Kang-doo, I agree with the sentiment that Moon-soo should yell more, but you clearly have no fucking clue what it’s like to be a woman and the survival strategies we employ when men get in our faces and casually wave small knives around. Appeasement was absolutely her best option and getting upset about her for doing that in that scenario is utterly ridiculous. As ninjaeyecandy texted me, Kang-doo needs to learn how not to yell, too. It became apparent in this episode that not all of his fights are born out of a righteous fury—some of them are because he basically hasn’t developed any other coping mechanisms.

That said, I’m in love with the way Moon-soo and Kang-doo are falling in love. I am such a sucker for ladies kissing first, and it was very sweet how it was paired with a thank you. I’m also a sucker for men who won’t disturb their ladies when the ladies fall asleep in inconvenient places. I’m so glad that when they both woke up, Kang-doo didn’t make a big deal about her falling drunkenly asleep on him—instead he just extended his hand to help her up and said they should go. (Please, please take his hand.) 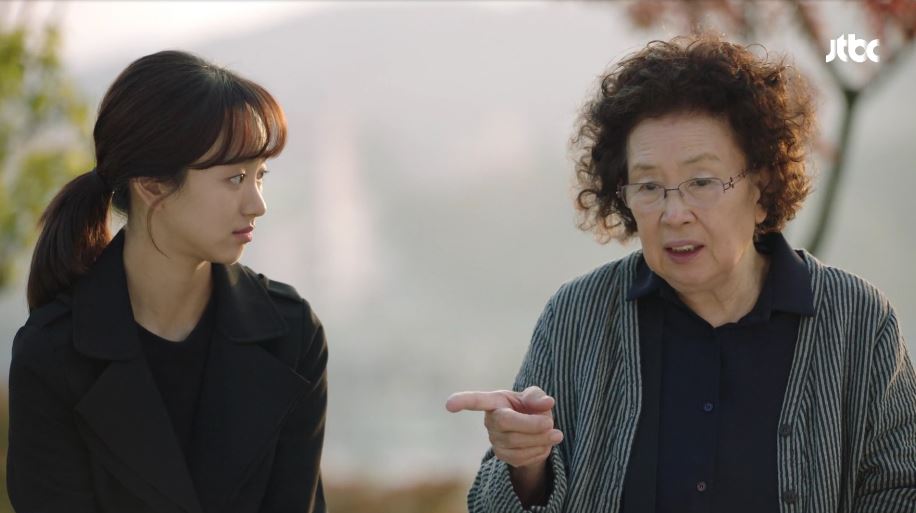 I’m delighted that Moon-soo got to meet the medicine seller, and I’m glad we got to have another glimpse into the medicine seller’s life. One thing that struck me was just how tired and lonely she seems. The medicine seller doesn’t have any family, and she treats basically any amount of kindness as a transaction that has to be repaid. Undoubtedly some of that has just lingered from her loan shark days, but mostly…

Mostly it makes my heart ache for her. I’m glad that she has Kang-doo in her life. The way she is gruff with him in person but sings his praises to Ma-ri, Moon-soo, and probably anyone else that even gives her half a chance makes me wish she was able to open up to Kang-doo in the same way.

The show is clearly telegraphing the fact that she’s dying, so the question that’s up in the air is whether or not Kang-doo suspects that something’s up. If I had to put money on it, I would suspect he knows something is up but is in deep denial, probably because of the way his mother died. I’m really afraid of what’s going to happen when he finds out. I just hope that he gets to spend more quality time with the medicine seller where she gets to be honest with him about what’s going on with her. 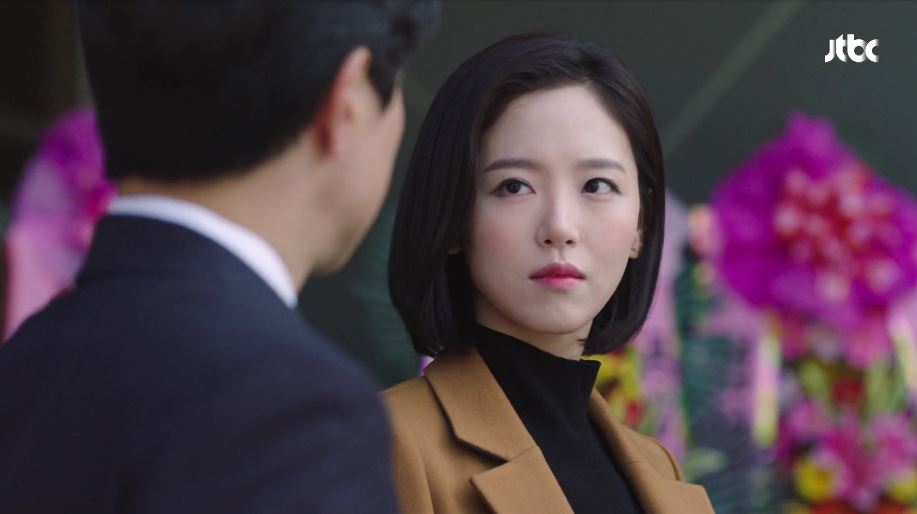 We got a few Yoo-jin/Joo-won questions answered this episode, and the most important thing was that Yoo-jin failed an important test of character ten years ago. She went to Joo-won’s father and basically begged him to take the fall for Cheongyu Construction in order to preserve the company and ensure that some people could get compensation for the deaths of their family members and layoffs wouldn’t happen. That’s some pretty awful emotional blackmail, especially since it looks like Joo-won’s father deserved a much smaller portion of the blame (for compromising on the building standards).

But that guilt and the accompanying public hatred appear to be what drove Joo-won’s father to suicide. No wonder Joo-won is really not interested in Yoo-jin if she continues to argue for protecting the interests of the company as opposed to actually taking responsibility for the company’s decisions. As much as I don’t like Joo-won (his checking up on Moon-soo did not please me), I’m glad that he is there, holding Yoo-jin and Yoo-taek’s feet to the fire.

(Side note: Ugh, that scene with Yoo-taek and Ma-ri made my—and her—skin crawl. It was a great contrast to the later snuggling by the river between Moon-soo and Kang-doo, though, so I understand how it served its narrative purpose. Still, I hope Ma-ri follows her own advice and keeps her heart far, far away from Yoo-taek, because I’ll scream in frustration if she catches feelings for him.) 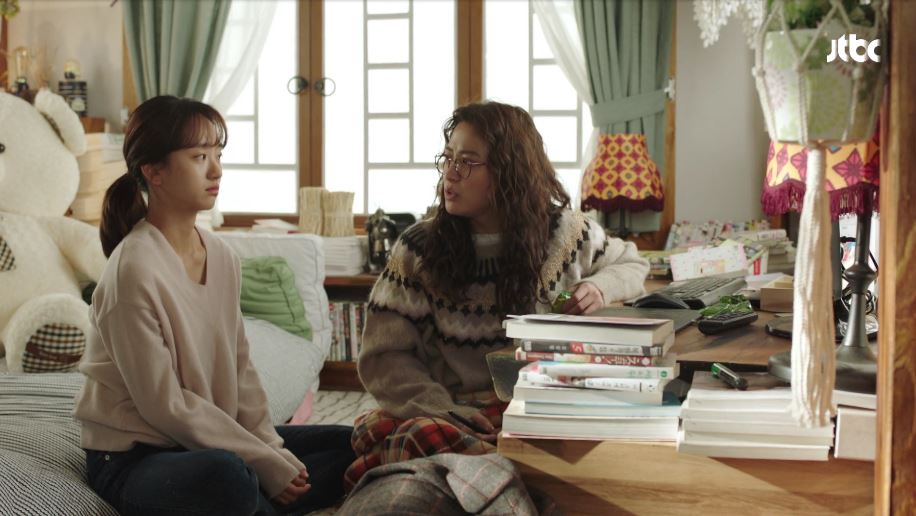 In the meantime, I’m rather uncomfortable with the turn Wan-jin’s plot is taking. This is not a romantic setup that I enjoy, what with him insulting her work and then coming to tell her to take responsibility for her comment that his own work had potential. You aren’t entitled to her time, energy, or mentoring, so get the hell out. He’s going to need to do some major groveling and drop dozens of levels of entitlement before I’m going to be okay with him being anywhere near Wan-jin.

It looks like the guy I referred to as a banker in the last episode is going to be a significant character, as I suspected. What intrigues me is that he is a team manager and somehow involved in Cheongyu. Is there another potential ally in the works for Joo-won and Kang-doo re: keeping Cheongyu accountable? I hope so, because they aren’t making all that much progress so far.