There’s just one release for you this week, but it is the highly anticipated A Korean Odyssey, by the Hong sisters. I’m tempted by the drama. Is it on your watch list?

Edit: Many thanks to esun for pointing out that Viki also has the license. 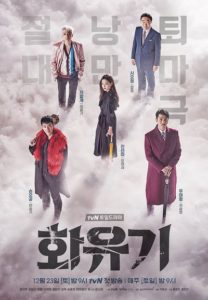 Based on the classic Chinese classic novel Journey to the West, this drama is a modern-day fantasy adaptation by the Hong sisters.

Son Oh-gong, the Monkey King, was exiled to the human world and had his powers sealed. In the moral world, he runs into Woo Hwi-chul, the Bull Demon King, who is now the CEO of an entertainment company. Jin Sun-mi is a real estate CEO and descendant of monks, and she has the ability to rid the world of demons and unseal Oh-gong’s powers. The three of them will clash as they fight to get rid of evil in Seoul—and try to obtain godhood and ascend to the immortal world.