Our two debuts this week definitely have a winter-ish color palette, what with all the muted colors and grays and blacks. I find myself surprisingly interested in Just Between Lovers–I blame my winter mood–so we’ll see where that goes. I’m going to pass on Bad Guys: City of Evil, partly because I adored the original cast and partly because they seem to care even less about female characters than the first season. (You can’t even bother pretending there’s one in the main cast? Meh.) Are either of these on your watch list?

Lee Kang-doo dreamed of becoming a professional soccer player, but his dreams were ruined when he broke his leg and his father was killed in a car accident. After his mother’s death from cancer, Kang-doo’s once rosy, wealthy life evaporates, leaving him drowning under medical debt and living in rundown motels. Ha Moon-soo discovers a beaten Kang-doo in an alley one day, and the two of them connect. Moon-soo has survivor’s guilt thanks to a car accident that killed her younger sibling, and running into Kang-doo gives her something else to focus on. Will their chance meeting offer them both the opportunity to heal? 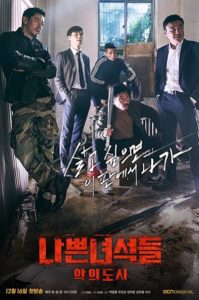 In this spin-off series of the 2014 Bad Guys, Woo Je-moon leads a team dedicated to using criminals to track down other criminals. Beside him is Noh Jin-pyung, a brilliant rookie prosecutor, and Jang Sun-chul, a disreputable detective. The two criminals assisting them are Heo Il-hoo, a “reformed” gangster turned fishmonger, and Han Gang-joo, who claims to have been framed but now seeks revenge. Together this team of five will go after the criminals that the regular methods of justice cannot reach.