We have two new Monday/Tuesday dramas, both of them center on cops/detectives, and they’re both in the annoying mini episode format. Will you be watching either one? I’m a little tempted by Two Cops, but we’ll see how that goes. 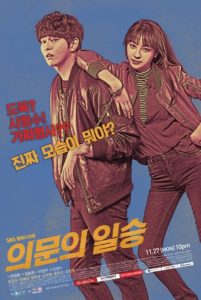 After spending ten years on death row for a crime he didn’t commit, Oh Il-seung breaks out of prison and passes himself off as a detective in order to chase down real criminals. He is soon offered a new, permanent identity—provided he can find a hidden cache of 100 billion won in three days. Il-seung quickly becomes entangled with Detective Jin Jin-young, who is trying to find out who really killed her father.

Cha Dong-tak is a detective in the Violent Crimes Unit. During one of his investigations, he crosses paths with Gong Soo-chang, a con artist, who ends up “possessing” Dong-tak’s body. While they try to figure out how to cohabitate in one body, Dong-tak encounters rookie reporter Song Ji-ahn. Her determination and feisty spirit causes her to butt heads with the straitlaced Dong-tak, but they also end up developing feelings for one another.