TL;DR: More people made it out of this episode alive than I anticipated. 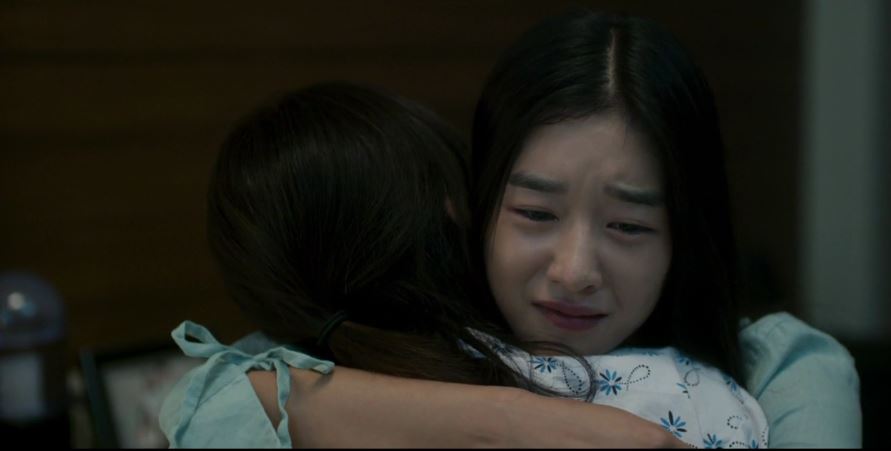 I may have cheered both times Sang-mi claimed to have a revelation about something she then used to her advantage. That’s one of the unanticipated side effects of turning her into the Mother of Spirits: there is no way for a believer to counter what she says when they think she has special access to the divine. Sang-mi was able to get a few seconds semi-alone with Dong-chul to pass on information, and then she got to have a totally private conversation with her mother because of her maneuvering.

(Can we pause for a moment to cry over admire the fact that Sang-mi declared to her worried mother that she is strong because she takes after Bo-eun? I was so worried when Bo-eun had her breakdown that we would never actually be able to see her and Sang-mi reestablish their relationship, but now the two of them can hug and promise to help one another survive the Guseonwon. I really need these two to be the happy ending for the show, sans the father, because he can rot for all I care.)

While there were several great moments for Sang-mi, she also had some terrible ones. It was so awful to watch her give So-rin a beating hands-on prayer in order to keep herself, and by extension her mother and Dong-chul, safe. I’m glad that So-rin was still alive by the end of the episode, but I’m very concerned that she is back in Wan-tae’s clutches. She was so close to freedom! I desperately want her to live after a whole year of undercover journalism—it would be too great of an injustice if she died before being able to break the story.

But Wan-tae needs a way back into Jung-ki’s good graces, and So-rin would be the perfect olive branch. I’m eager for the fractures between the Guseonwon leadership to get deeper because this has given us great insight into all of them. Wan-tae’s not a believer, and so he wants them to just pack up and move on to another town. He is increasingly frustrated by Jung-ki’s and Eun-shil’s condescending attitudes because, from his perspective, he’s the only one keeping this con monetarily afloat. Meanwhile, Eun-shil is a believer, and she is obsessed with training Sang-mi and proving her faith to New Heaven’s Sovereign so that she can be reunited with her dead daughter.

While I’m relieved that Eun-shil’s sin is not being a “bad” mother, I am a little sad that it is killing her husband, who apparently was an abuser. I feel like she needed to apply a bit of Chicago—he had it comin’—instead of feeling guilty about it, especially since that incident appears to be what has pushed her so far into the cult along with Jung-ki’s manipulation of her faith. It plays directly into her monstrous actions now—she killed, once, for her own reasons, so what’s a little illegal drugging and torture when she’s doing it to ensure salvation? If there is to be any redemption for her in the show, I’m about 90% certain that it will cost her her life now.

As much as I hate Jung-ki, I have to admire his absolute calm when faced with Wan-tae. He didn’t even flinch when Wan-tae moved to smash his face in with a centerpiece, and he does not give two shits about what Wan-tae knows about his eight-time offender past. Jung-ki is confident in his ability to have Wan-tae quietly murdered, and Wan-tae is the one who blinked first.

The boys are making good progress . Dong-chul continues to be clever, and his willingness to be repeatedly punched in the face has earned him the grudging trust of the higher ups. Here’s hoping they reward him with more privileges and freedom so he can use that to gather additional damning evidence.

It was great to see Sang-hwan and Man-hee mount a successful rescue attempt for Jung-hoon. (We needed a win for the good guys.) The question now becomes whether or not Jung-hoon will cover for his father. I’m hoping that he will acknowledge his father’s faults, love him, and still do the right thing. His father’s huge test of character will be whether he tries to get his son to cover up his own kidnapping and torture.

Sang-hwan’s frustration with Kang-soo is sadly believable. The man can’t bother to do something simply because it is right; he must be persuaded that they have enough hard evidence to garner media attention that will ultimately benefit him in order to act. I’m glad that Sang-hwan still treats him hostilely and doesn’t fully trust Kang-soo because he doesn’t need to grapple with disappointment and shattered ideals when his mother has regained some use of her body.

With any luck, Sang-hwan’s mother will be able to provide information—perhaps a recording?—that they can use either to bring Yong-min down entirely or blackmail him into turning on the cult. I’m hoping for a mother-child happy ending for Sang-hwan and his mother, too, because they deserve to be free of Yong-min.