TL;DR: We have officially hit a turning point, thank any deity except New Heaven’s Sovereign.

Sang-mi continues to be a resilient heroine, and I admire her balancing act. She resists whenever she can, whether that’s trying to leave during prayers or telling So-rin to run or snarking back at Wan-tae and Jung-ki, even though she is terrified and constantly under threat. I love her fierce defense of her mother and the way she continues to call out her father for being a trash human being. And I am so, so grateful that she knows she isn’t entirely alone anymore.

There were two big things that surprised me in the Guseonwon this episode: 1) there is another young woman around Sang-mi’s age, and 2) Eun-shil came to Sang-mi’s defense. I had honestly resigned myself to Sang-mi being forever surrounded by women at least a decade older than her at all times, but So-rin stepped into the picture as a believer at the Guseonwon. She only had one speaking scene, where she ran into Sang-mi and Sang-mi warned her about staying, but she was present in the background in the cafeteria scene and was one of the people packing up Sang-mi and her father’s things. Dare I hope So-rin becomes an ally for Sang-mi? It’s either that or a true believer bent on getting her to fulfill her role as Mother of Spirits, but I’m personally rooting for ally.

Which is what made Eun-shil’s scene in the cafeteria so surprising. I honestly didn’t expect that we would get much depth from Eun-shil in this series, but we’ve now had two flashbacks to her dead daughter, and each time it prompted what appeared to be genuine concern from Sang-mi. While I’m still hoping that the sins she’s looking for redemption for aren’t her “failing” as a mother, I’m intrigued by the possibility that Eun-shil will find her redemption by helping Sang-mi. Again, pretty optimistic for me, especially since I also want So-rin to be Sang-mi’s ally, but I would be incredibly happy if both Eun-shil and So-rin ended up being on Sang-mi’s side, even if it is only in little ways.

(And just how did she get that scar? It looked like a burn to me, but I have no idea what to make of it.)

Because Sang-mi is definitely going to need allies within the Guseonwon. This whole Mother of Spirits thing is really freaking me out, and I’m actually slightly annoyed we haven’t had one of those terrible “Let me spell out something for you that we both know for the benefit of the audience” scenes. (I can’t believe I want worse writing just to satisfy my curiosity about this theological point.) It seems to be fairly common knowledge that the Mother of Spirits is supposed to be Jung-ki’s bride and that she is the key to them boarding the ship of salvation—which Sang-mi is definitely right to be freaked out by.

But does she know she’s supposed to be a “pure scapegoat,” too?

The conversation between Jung-ki and Wan-tae has me very worried. I really thought we had an either/or decision when it came to the wedded to a god vs. virgin sacrifice cult options, but now it looks like both may be on the table. And it doesn’t sound like many people know about option number two. 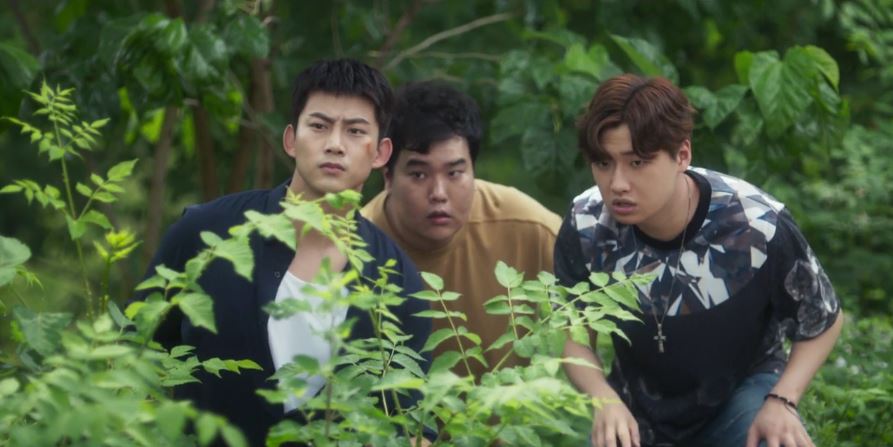 I’m so glad that the quartet is on the same page about helping Sang-mi. Sang-hwan and Dong-chul are still on rocky ground re: their friendship, but they are willing to shelve those uncomfortable feelings to focus on bigger issues. Their heroics still need to level up, though, what with the missed timing and Sang-hwan, Jung-hoon, and Man-hee deciding their best option was to stop their car in the middle of the road and basically challenge Wan-tae and Wan-deok to a fistfight. It’s only episode eight; there’s no way a tactic like that could possibly work.

Not to mention the fact that they’ve already thrown down the gauntlet with Jung-ki in this episode and are on Eun-shil’s radar. How are they supposed to get anywhere near Sang-mi when the three of them have basically aggro’d the entire Guseonwon leadership?

Well, they’ve got eight episodes to sort out the meaning of subtlety and well-reasoned plans. In the meantime, Sang-hwan and Dong-chul need to fix their relationship. I really like that Dae-shik is there, trying to give Dong-chul the worldly, realistic advice (even though I think he’s wrong and that Friendship Will Prevail™). It seems like the boys are going to be the catalyst for the other plots to join up with Sang-mi, considering Man-hee and Dong-chul both know Joon-gu, Sang-hwan knows his father is up to shit (and probably sleeping with Ji-hee), and Jung-hoon’s father is a cop who knows Detective Lee.

I am currently concerned that these gangs and politicians and police officers are too caught up in their own games to realize they’ve got a bomb right on their doorsteps in the form of the Guseonwon cult. Could they be working in concert? Perhaps. But I think it would be far more dramatically interesting if these two worlds collided instead. Maybe while all those factions fight each other, Sang-mi can use the boys (and lady allies? please?) to get her and her mother out.