We have two new dramas coming up this week. I’m probably going to skip both of them, but are either of them on your watch list? 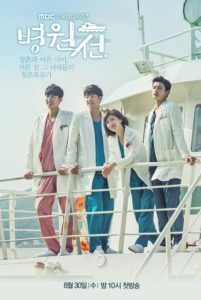 After an incident cuts off Song Eun-jae’s opportunity to be a surgeon at a prestigious hospital, she takes her skills to a humanitarian project. The hospital ship is home to different doctors and medical staff, and their mission is to travel around to remote places and treat those who are out of range of more conventional medical care. Eun-jae is less than enthused with her (often stubborn) patients, but fellow doctor Kwak Hyun has a far better bedside manner than she does. Hyun’s father is the man who owns the hospital ship, and he works hard to connect with his patients. Meanwhile, Kim Jae-geol specializes in traditional medicine, much to the consternation of his father—and Eun-jae, who disdains the practice. The three doctors need to figure out how to get along and how to care for their patients as a team.

Lee Roo-ri has had enough. She has given up on getting a stable job at a large company, and her parents’ relationship is about to implode. On top of that, Roo-ri caught her boyfriend cheating on her. She decides to take a much-needed getaway to a foreign country, and while she’s there, she meets Jung Tae-yang. Tae-yang’s biggest priority is his own happiness, and he travels the world in search of it—and to help him cope with some problems of his own. After the two of them meet, Roo-ri’s life takes a sharp turn, and she and Tae-yang slowly change their bickering hostility into something more.

2 thoughts on “One medical and one family drama coming up”