TL;DR: Well, your god is an asshole. 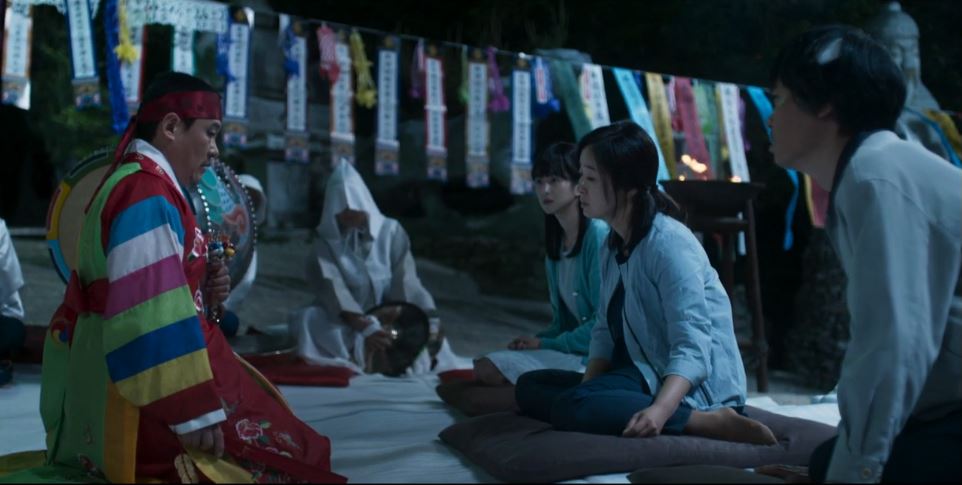 I sure hope you’re ready to spend the entire episode in various states of rage, because Sang-mi’s family got swallowed up by the cult in this episode, and there are all sorts of injustices and awful things going on. I personally spent my time keyboard smashing and caps-locking swear words in my notes. Also? Warnings for sexual assault/rape, domestic violence, and violence against a neurodivergent kid.

One of the problems in the first half of this episode is that it isn’t clear how much time is passing. It doesn’t seem like much time has gone by, considering the pace of Dong-chul’s scenes, but that makes Sang-mi’s mother’s plot extremely frustrating. You’re telling me some doctor can—after maybe a session or two since the family reportedly went to multiple doctors for help—authoritatively say that her treatment will require hospitalization, possibly for years? You’re escalating straight to the worst possible case without any on-screen attempts at therapy or medication or, yes, even a shorter hospitalization until she’s stabilized and can safely be sent home? No wonder Sang-mi’s father heads straight for a religion when it offers him hope and a miracle instead of threatening to lock up his wife in a mental hospital for years on end.

And I am so pissed by that, even though I can understand why he is desperate enough to reach for it. I’m pissed that this cult has him believing that their move, Sang-jin’s death, and the mother’s mental illness is all a sign from New Sovereign that they’ve been chosen so they can be sanctified and saved. I hate that Jung-ki is so perfect a manipulator (or believes in his own divinity enough) that he can turn Sang-mi’s insistence that they take Jung-goo to a hospital into an opportunity to admonish his followers for their lack of sincere belief. I cannot WAIT for this man and his church to go down.

My heart hurts for Sang-mi. Her mother is AWOL as far as this episode is concerned, and her father is now a true believer who is willing to slap her across the face for insisting a beaten boy be taken to the hospital instead of being “treated” with magical water. (He’s dead to me until he’s willing to stand up for his daughter and take his wife to get actual help from experts back in Seoul like Sang-mi begged him to instead of turning to shamans or a cult.) Sang-mi has endured three years trapped in a church she doesn’t believe in, to the point that she’s working in the kitchen regularly while her dad does labor. Is Sang-mi going to college? Do they even have a home anymore?

I’m so glad that Sang-mi stepped in to rescue Jung-goo, and I’m furious that Wan-tae continues to be alive. I don’t know what she’s going to do with Jung-goo’s recording of Wan-tae beating/sexually assaulting/raping a female parishioner (only the last few seconds are shown, when she escapes from him, screaming, so it’s unclear how far things went), but I hope that Sang-mi will be able to use it to bring Wan-tae and the rest of the Guseonwon down. Wan-tae is beyond vile, from abusing vulnerable people to his constant creepy remarks about Sang-mi’s beauty. I desperately want Sang-mi to be the one to take Wan-tae down (or the parishioner, if she is allowed to become a character and not a plot device) because fuck the idea that problems between church members stay within the church. That’s fine and dandy for settling arguments about which family gets to sit in what pew, but when it comes to actual criminal activity, that steaming pile of shit needs to be exposed to the air for everyone to smell.

I’m a little hopeful that Sang-mi and the others are about to start that quest. Dong-chul will be getting out of prison soon (three years! what the hell happened there?), and Sang-hwan’s back in town and actually learned from his previous inaction. Now he’s willing to start a brawl over asshole upperclassmen pressuring freshmen to drink instead of just keeping his head down. Keep that righteous fury and the shame that motivates it, Sang-hwan. You’re going to need that, plus the backing of your friends, to help Sang-mi bring down a cult.