TL;DR: I figured you weren’t going to make it through the whole show based on the opening, but I really thought you’d last longer than episode two.

So this is an upsetting, distressing episode. We’ve got multiple sexual harassment scenes, bullying scenes, a hero fumbling his test of character, and ultimately a death from suicide. It took me about four hours to get through this episode because I kept getting angry for characters and/or wanting to chase the cult members off. Just so you know before you dive in.

Let’s talk first about the thing that got me filled with a low-level rage and heartbreak: how Sang-jin and Sang-mi didn’t want to tell their parents about the bullying incidents because they didn’t want to add to their parents’ stress. While I totally understand why they would make that choice, as an adult, I spent the whole episode wishing they’d at least try to tell someone. (Though because of the genre and real-life cover-ups and scandals re: school violence in South Korea, I can also understand why they wouldn’t trust teachers they just barely met.)

There are a couple of things I’m not thrilled with in regards to Sang-jin’s suicide plot line. For one, I definitely noticed the flashback panning from the flowers to his body on the ground during Jung-ki’s speech. They were probably going for a “what a shame this person’s life was cut short in the springtime of youth” kind of thing, but for me, it got uncomfortably close to a beauty shot (though it wasn’t sexualized at least). I’m also wary of the background narrative going on re: Sang-jin desperately praying to heal his disability (and of what they’re going to do with the mentally disabled kid in the cult group—they gave him a name and Jung-ki talked about evil spirits right after the show introduced him, so I don’t think he’s a one-off character), but I don’t know enough about ableism in media to be able to talk about it. I’ll just note that I’m disappointed that Sang-jin, the only disabled character, was killed off in order to put his family further in peril. 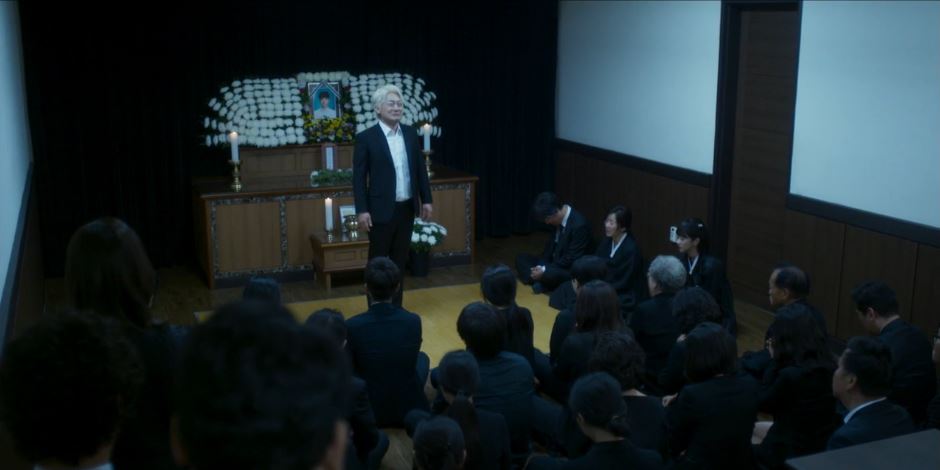 Because let’s make no mistake: the Guseonwon group is using the Im family’s tragedies to ensnare them into their cult. It’s a deliberate, calculated tactic to prey upon the vulnerable and exploit their desire to be good people. Right now they’re mostly love-bombing the family—giving them a place to stay, helping them unpack, picking the kids up from school, showering them with compliments—and the parents’ desire to repay that kindness had them sending the kids to help pass out fliers and got the dad to say they ought to go to a church service.

It’s going to get worse. A lot worse. We got a sneak peek of that when Eun-shil snapped at Sang-mi to take the medicine, even though she was uncomfortable with a gift that expensive. The Guseonwon cult members are going to start pushing at the family’s boundaries more and more, and in order to maintain the give-and-take of polite society, they won’t resist those intrusions.

So that’s why the final scene, where Jung-ki shows up with his church in tow, pissed me off so much. He’s taking the Im family’s very real grief and mourning and twisting it into a performance piece for his followers. So much of that sermon was about him and his relationship to New Sovereign—and narrowly skirting blasphemy by demanding answers/taking New Sovereign to task for taking Sang-jin back. (How long will it be until Jung-ki becomes more than just the humble man on earth come to proclaim their god’s gospel?)

I believe that Sang-mi’s parents have bought the show based on their reactions to Jung-ki’s speech. I also believe that Sang-mi hasn’t. Her expression at the end, where she has almost completely stopped crying and is almost glaring–gives me hope. Hang on to that this is wrong gut feeling, Sang-mi; you’re going to need it to survive.