My corner of the internet has been…not enthused by this one, but I’ll admit that I’m intrigued by it (she says, not having actually watched any of the teasers). It has been years since I’ve read the first couple volumes of the manhwa, so I remember very little about it (other than the impression of it being gorgeous) and don’t really have any nostalgia to ruin. Plus, it has the Nine/QIHM PD and the Misaeng/Arang and the Magistrate writer, so I kind of want to give it a chance just for them. Will I? We’ll see . 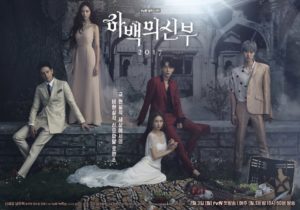 Summary: Psychiatrist Yoon So-ah doesn’t believe in the legends that say her family is cursed to be eternal servants of the gods. She has a life to live and debt to pay off; ridiculous superstitions aren’t worth her time. At least not until Habaek shows up at her practice, claiming that he is a water god and that she is his bride. Habaek needs her help to find a magical stone that will give him the power to take the heavenly throne.  Soon even more gods walk into So-ah’s life: Hoo-ye, a demigod and resort CEO who falls in love with So-ah; Mu-ra, a water goddess in love with Habaek; and Bi-ryum, a wind god who is in love with Mu-ra .

This drama is a modern adaptation of Yoon Mi-Kyung’s historical fantasy manhwa Bride of the Water God.

Are you a fan of the original manhwa? Will you be watching it?