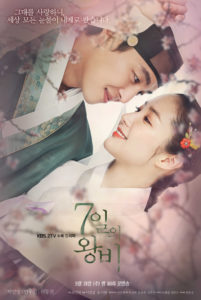 It’s not often that a woman gets to be the center of a sageuk, and that alone would have probably been enough for me to be interested. But once you toss in Park Min-young and the director of Healer, you definitely get my attention. I’ll be checking out the show this weekend; in the meantime, here are the things I really want from the drama:

Is Seven Day Queen on your watch list? Have you already seen this week’s episodes? What are your hopes for the show? Let me know!