May is a busy month for drama premiers, and this week is no exception. We’ve got four new shows starting up–which ones are on your to-watch list?

Ji-young, an individualist who purposefully avoids building relationships with others, meets Byuk-soo, a man who can’t survive without others.

In the 18th century, Crown Prince Lee Sun discovers that Joseon is being run from the shadows by an organization called the Pyunsoo Hwe. This organization controls the clean water supply throughout the country, and that has given them an unbelievable amount of political power and wealth. Meanwhile, Han Ga-eun, the daughter of an executed military commander, seeks revenge upon the crown prince for his part in her father’s unjust death. Despite this, the two of them fall in love, and they join forces with their allies to take on the Pyunsoo Hwe and free Joseon from the organization’s powerful grasp.

Noh Ji-wook is a successful prosecutor who has recently made the switch to being a private attorney at an impressive law firm. There he meets prosecutor-in-training Eun Bong-hee, and the two of them immediately clash. Prosecutor Cha Yoo-jung, Bong-hee’s boss, also happens to be Ji-wook’s ex—and still has feelings for him. While attorney Ji Eun-hyuk is a friend of the Noh family, he privately resents Ji-wook. While Ji-wook and Bong-hee’s antagonistic relationship begins to develop into something less hostile, the two of them end up in the crosshairs of an amnesiac killer who keeps committing the same murder. 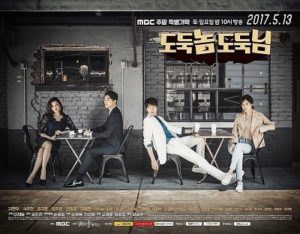 Jang Dol-mok runs a messenger office during the day and at night becomes a thief who targets the corrupt members of South Korea’s elite. Kang So-ju, a police detective, is dedicated to her work and will do whatever it takes to protect the weak and catch criminals. Han Joon-hee grew up poor, and his hard work ethic and uncompromising principles led him to be a prosecutor. Yoon Hwa-young, a lawyer from a wealthy family, has caught both Dol-mok and Joon-hee’s eye, but So-ju’s bickering relationship with Dol-mok will complicate things as the thieves work to bring down the rich and the powerful who are manipulating society out of greed.