We’ve got just one new drama premiering this week. I’m torn about it–do I watch Go Ah-sung, who I loved in Heard It Through the Grapevine? or do I avoid it because terminal illnesses? What are you going to do? 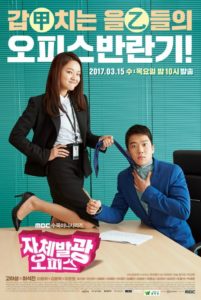 Eun Ho-won has been struggling to find a job. After repeated rejections, she gives up and attempts suicide by throwing herself into the Han River. Ho-won is rescued and taken to the hospital, but once she is there, she learns that she may have a terminal illness–and that she has finally gotten a contract position at a furniture company. She decides that she has nothing left to lose and throws herself into living what’s left of her life and her new job. At work, she clashes with her superior, Seo Woo-jin, who considers her and her newfound, bold attitude a problem.