One of the things I admire most about these two episodes is the way the endings raise the stakes astronomically. Episode three has the shortest turnaround times I think I’ve ever seen between the hanging and the firing of a Chekov’s Gun, which is notable considering just how long it will take for some of the other guns in this show to be used. 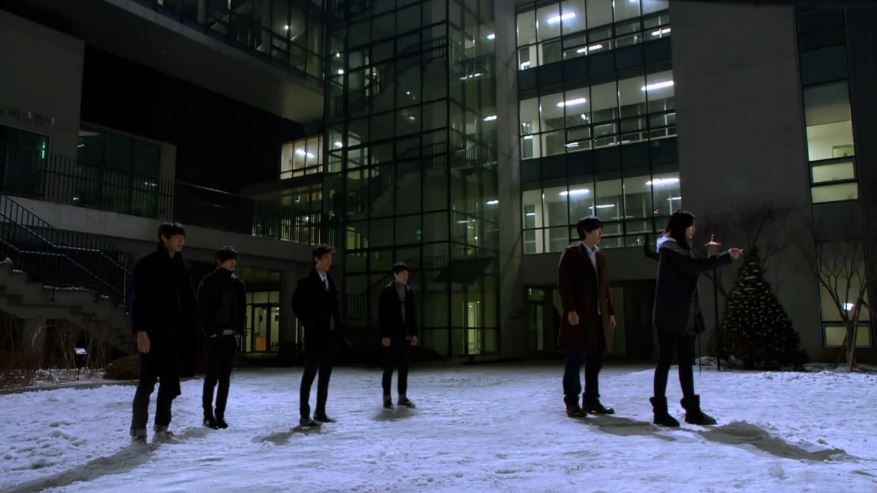 In fact, the scene where Eun-sung blows the whistle repeatedly is the point where I originally fell in love with White Christmas. I loved how it ripped into the quiet moment of Moo-yul walking through the hallway, how fear flooded his expression when he registered what was going on, how Jae-kyu and Chi-hoon and Young-jae and Yoon Su all came running when they heard it, even though they didn’t know precisely what was going on. Those shots from outside the school, watching the boys sprint through hallways and downstairs all while they’re narrating about adventures and devils and reality and danger, the relentless blasts of the whistle, the swelling music, the way Eun-sung points to the horror that has been hidden in plain sight all day—

Shivers, still, for that cinematic paradigm shift. I adore it. 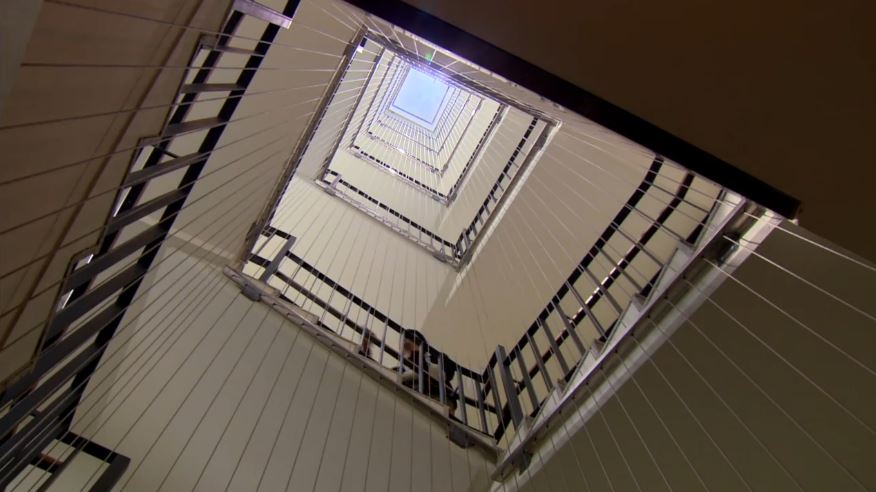 The end of episode four is equally powerful in a different way. There is something awe- (and dread-)inspiring about Yo-han’s slow climb up that never-ending, barred stairwell as the students on the lower levels begin piecing together information just moments too late. And poor Chi-hoon, who had been making the swiftest, most accurate headway on the black letter mystery, doesn’t have any of crucial information that would have been crucial to stopping Yo-han before he could make a move.

Episodes three and four continued to build on the being-watched motif, and we were rewarded with more character backstory and insight. We got lots of proof that Moo-yul really does resent/hate Chi-hoon, saw that Eun-sung’s stalker problems of the previous year are still alive and well, and had a terrifying chase sequence where the hunters kept cheating thanks to the security cameras. (We also had a pretty funny sequence of people traipsing in and out to gawk and Mi-reu while he was locked up, which never fails to amuse me.) Plus, Jae-kyu got to spill his guts about feeling invisible and overlooked and unimportant, which all mirrored Kim Ji-su’s tragedy in the previous year, and Eun-sung was able to look at herself and draw some conclusions about who she is now and who she used to be. Several characters also got to stare at their hands in a “my-god-what-have-I-done” moment of self-reflection.

Whether or not they’ll actually learn from it is a question to be answered later.