One of the things I like doing with every White Christmas rewatch is finding something new to focus on. I’ve been caught up in the nuances of Chi-hoon’s hands, the dramatic emphasis of a particular camera angle, the use of mirrors, framing of long-distance shots, specific character arcs, and other items. This time around, what caught my attention was how often the characters are just…watching each other. 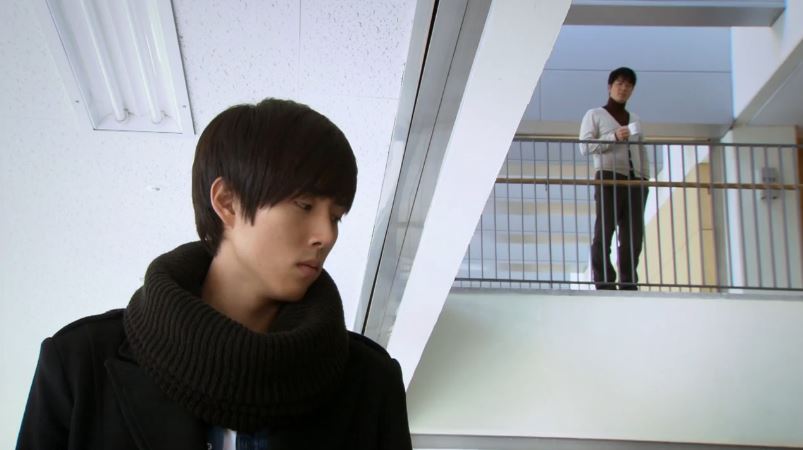 From the stalker following Eun-sung the previous year to Kang-mo recording his classmates to Mi-reu spying via the security cameras to Moo-yul glaring at an oblivious Chi-hoon to Yo-han observing everyone, basically. Sometimes, even not!people get in on the watching action, too, like the deer in the courtyard, the Neptune(?) statue, and the Monster. There are 184 security cameras and ten people in this school, and there are so few places to go without prying eyes.

The oppressive nature of this lack of privacy has the unnerving effect of forcing ugly and uncomfortable truths out of people, whether that’s to other characters or the audience. Chi-hoon has overheard that Moo-yul hates him, and the audience understood Mi-reu’s confession of hatred toward Chi-hoon, too. Meanwhile, Yo-han is learning all kinds of things about Kang-mo and Jong-il’s personal philosophies and has confronted Young-jae on his different “faces.” And Jae-kyu always observes quietly, no matter who he is with. Being watched–or not being watched, as the case may be–was the decisive moment between Mi-reu and Yoon-su and created a huge schism between the two. Wanting to be both seen and ignored was also a big sticking point between Eun-sung and her failed romance with Moo-yul–a conversation which was observed and intruded upon by Chi-hoon.

And then there is the person who wrote the letter, of course, who has witnessed/named the main characters’ “sins” and cursed them for it.