TL;DR: RED ALERT. Secret princess confirmed! Also, the main pairing gets tainted for me in the course of roughly thirty seconds. Why did you have to do that? 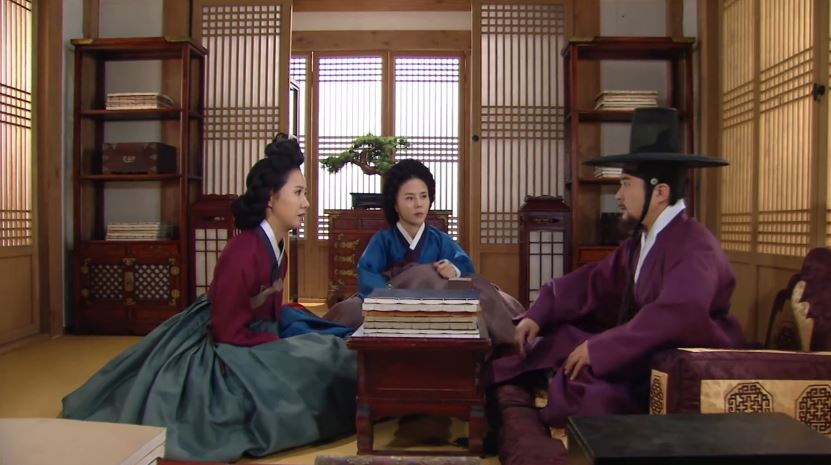 It’s nice to finally have it confirmed that Ok-nyeo, is, in fact, the daughter of a king and half-sister to the current king. Which means that the terms for a happy ending have changed: it now must include Ok-nyeo being recognized and brought into the royal family, right? That’s how these things typically work in secret royalty stories. And since we’re in the Joseon era, the moment King Myungjong discovers she is his half-sister, that ought to halt his ridiculous “bring Ok-nyeo into the palace and make her my concubine” plot he has cooked up despite Ok-nyeo’s explicit rejection of that exact same scheme. (More on that later.)

These two episodes felt like they were more about maneuvering people into place than driving the plot forward. Lots of lateral movement; little forward momentum. We stalled on the covering-up-the-murder plot, the dissolving-the-Rites-Bureau plot (unless you count Young-jin moving to water maid status), and the queen-dowager-starving-herself plot. We made very slight progress in the trade-wars-and-espionage plot and the creating-more-lawyers plot.

I suppose that we did make some major leaps in the make-the-bad-guys-want-to-kill-Ok-nyeo plot, but honestly, this is like the seventh version of that plot, so it doesn’t come across as very fresh or entertaining. It does warm my heart, however, that Nan-jung is insistent that Ok-nyeo is trouble and a threat that needs to be murdered immediately. After their initial run-in, Nan-jung has always been convinced of Ok-nyeo’s threat status—Nan-jung doesn’t dismiss Ok-nyeo because she is a lowborn woman, unlike Won-hyung, who just cannot seem to wrap his mind around the idea that the king would talk to a common woman about politics. Clearly, the king is sneaking out in order to have hot sex with Ok-nyeo, there’s no other possible explanation. 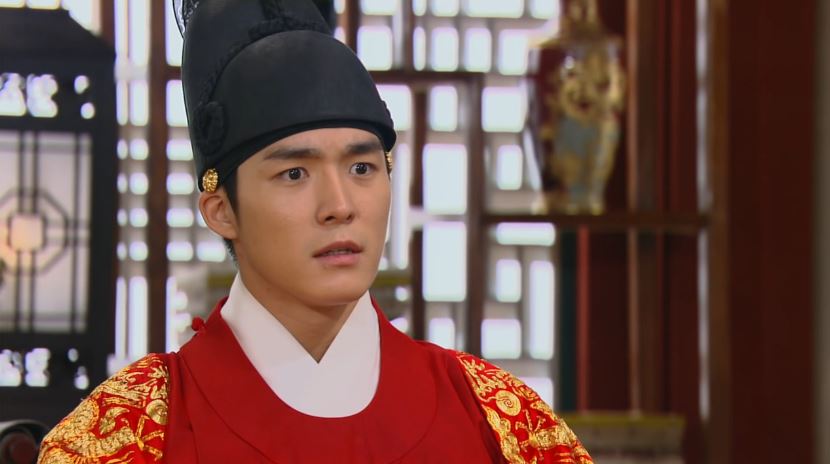 Honestly, one of the most unintentionally hilarious things in this show was just how much concern Won-hyung had over who his nephew was “gracing.” Like, the man is on the verge of fake tears and using his petitioning-the-crown voice over the rumor that the king is sneaking out of the palace in order to bone an ex-slave-now-shaman. But even tying the rumor into the Confucian-vs-Taoist political battles going on (and how the king should totally kill Ok-nyeo in order to quell those rumors) didn’t keep me from snickering over that whole sequence.

What did stop me from snickering is how King Myungjong handled the fallout of it. Instead of gathering up his courage and revealing his true identity to Ok-nyeo, he backed out at the last moment (again!) and continued to push his secret inspector façade. And if that weren’t enough, he did that awful second-lead maneuver where he tests the potential romantic waters with the heroine by asking her about one thing while secretly hoping she will just intuit what it is he wants. No, sir, she has never dreamed of being the king’s bedmate—why should she? And despite her explicitly saying she doesn’t want to be a palace lady and potentially a concubine, the king marches ahead anyway because he has convinced himself that it is the only way he can protect Ok-nyeo.

She told you no. She told you she loves someone else. So all the middle fingers for you, sir, for trying to go ahead with it anyway. 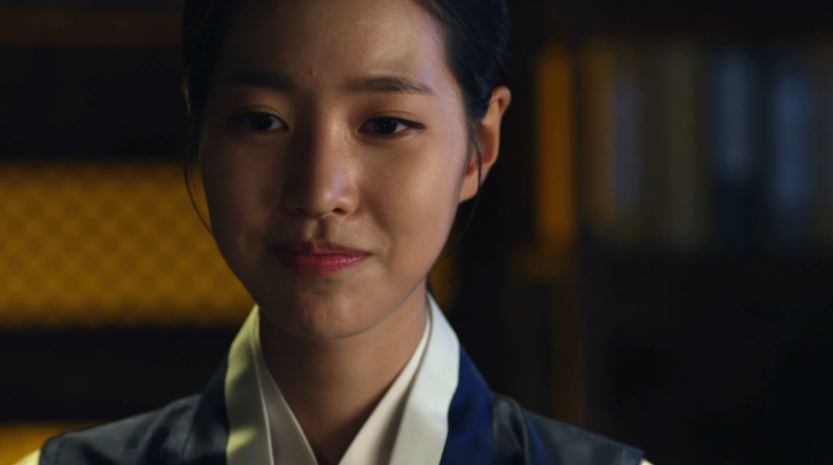 Unfortunately, Ok-nyeo’s refusal to possible concubinage also came along with an extremely uncomfortable confession of love from her. Look, I get it, she and Tae-won are end game. But did you have to have her say that she’s basically had a crush on him since she was a kid? That is all kinds of squicky. It also makes me frown, because that’s definitely not the vibe I got from teenage!Ok-nyeo. I thought they caught romantic feelings for each other on the journey to Ming, after the second time skip, when they were both adults and her secret mission involved exploding half his trading camp. If Tae-won confirms that he also fell in love with Ok-nyeo while he was a prisoner, I can unequivocally say it’s going to ruin the romance for me.

So don’t do it, Show. You’ve already entered squick territory.

In other news, how long has it been since Ok-nyeo has come out on top in a fight without help? I honestly feel like it has been ages (the watch-a-woman-kick-your-ass-you-ignorant-man Strong Woman™ beat down she gave some recruits, which is a tired, stale thing), and this irritates me, since at one point she was a secret intelligence agent and, you know, one of the best of the best. While I’m pleased I got to see her and Chu-yi fight together, I’m not pleased that they lost, Ok-nyeo got seriously injured, and they had to be saved by a cavalry of men. I know, I know, they were outnumbered and also fighting other ex-secret intelligence agents—but still. How long do I have to wait for Ok-nyeo to come out on top in a fight without needing to be rescued? 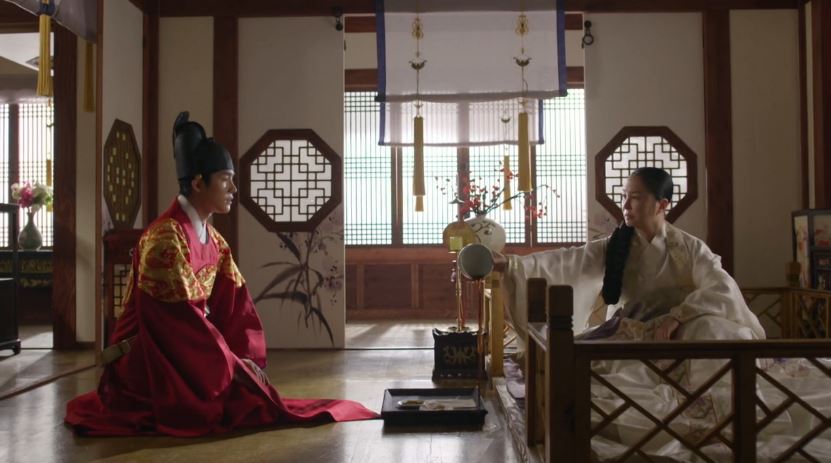 A quick shout out to Queen Dowager Munjeong, who is fighting back against her rebelling son by playing her final card: herself. The scene where she empties the bowl he brought her and more or less declares she’ll starve herself to death was chilling in all the best ways. I’m hoping that she will jump back into the action soon, now that tensions have ratcheted up with Ming and the border is closed. Won-hyung is an average villain; I want the queen dowager and Nan-jung to retake the forefront as they try to regain control of the court.

I’m also surprised to find out that Jong-geum is now pregnant. Was the first doctor wrong? Or did Won-hyung bed her again? Is the second doctor lying just to appease her? If she really is pregnant, just how much chaos will that cause in Won-hyung’s household?

The final quarter of the show is shaping up to be very interesting. Here’s hoping it lives up to its promises.