Three new kdramas are going head to head in the Wednesday/Thursday time slot. My money is on Legend of the Blue Sea to beat them, numbers-wise, but I also thought SHR would dominate its timeslot, so. Maybe South Korea is in the mood for a sports drama or an incurable disease drama. Which ones will you be checking out? 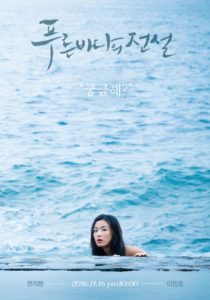 Legend of the Blue Sea
(Available on Viki.com)

Shim Chung, the last mermaid on earth, meets Heo Joon-jae, a brilliant scam artist, when she decides to explore the modern world. She is drawn to Joon-jae since he is the doppelganger of Kim Moon, a nobleman she was in love with during the Joseon era. As Shim Chung learns more about the human world, she gets caught up in Joon-jae’s scams, and the two of them begin to fall in love. This drama was inspired by the short story collectiong “Eou Yadam” by Yu Mong-in (a Joseon-era scholar). 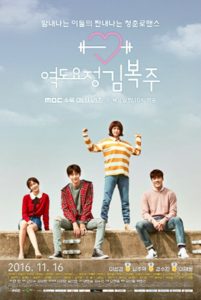 Loosely inspired by real-life Olympic gold-medalist weightlifter Jang Mi Ran, this drama centers on Kim Bok-ju, a twenty-year-old college student. While Bok-ju is attending Hanwool College of Physical Education, she and her best friend, swimmer Jung Joon-hyung, begin to fall in love. Bok-ju’s roommate, rhythmic gymnast Song Shi-ho, regrets breaking up with Joon-hyung and becomes uncomfortable with his and Bok-ju’s growing closeness. Joon-hyung’s cousin, Lee Jae-yoon, also happens to be Bok-ju’s first crush. The quartet must figure out how to overcome their past difficulties and traumas in order to fulfill their dreams. 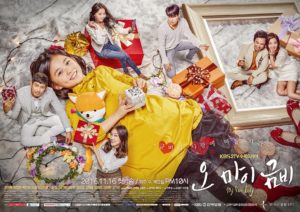 Oh My Geum-bi
(Available on Viki.com)

Eight-year-old Mo Geum-bi has a rare genetic disease: Niemann-Pick Disease, Type C, sometimes referred to as “childhood Alzheimer’s.” Her father, Mo Hwi-chul, had to give up on his dream of being a chef when he lost his sense of smell and is now working as a con artists/swindler in order to take care of her.  Geum-bi’s estranged mother, Jang Joo-young, is an intimidating woman who does not approve of Hwi-chul’s new profession. Go Kang-hee, a lonely arborist who sometimes retrieves stolen artifacts, meets Geum-bi and Hwi-chul, whom she begins to fall in love with.