We have two new dramas coming out next week, and despite their wildly different synopses, they’re both adaptations of previous works and comedies. 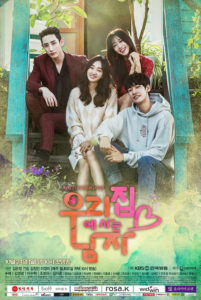 The first is The Man Living in Our House (KBS || Monday/Tuesday). Flight attendant Hong Na-ri returns to her hometown after the death of her mother only to discover a stranger living in her mother’s house. Go Nan-gil, the young stranger, insists that he married Na-ri’s mother before she died, and that makes him Na-ri’s stepfather. Na-ri doesn’t believe him and sets out to prove that he is a conman. This drama is based on a 2015 webtoon of the same name.

This show has pages on both Viki and on DramaFever, though I didn’t notice anything about regions or exclusivity. Sometimes cohabitation is right up my alley, but I’m a bit wary about this setup. Still, if I hear good things about it, I might check it out. 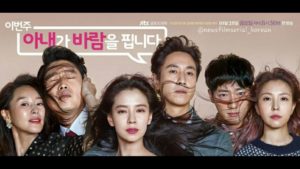 The second is This Week My Wife Will Have an Affair (JTBC || Friday/Saturday). TV Producer Do Hyun-woo has a great career and a happy eight-year marriage to the perfect woman–or so he thinks. When he finds a reservation for a hotel room on his wife’s phone, he starts to question everything. In desperation, Hyun-woo goes online to a seek help from a forum filled with people who have been cheated on by their spouses. Two other couples are also dealing with problems in their own marriages. This is based on the 2007 Japanese drama Konshu Tsuma ga Uwaki Shimasu, which was based on a real-life event.

This drama also has pages on Viki and DramaFever, so with any luck, it’ll be available for your region if you’re interested. I’m considering this one, but I’ll be waiting to hear what the comedy is like (and how they treat the wife).