TL;DR: I’m pretty sure we all saw that coming. 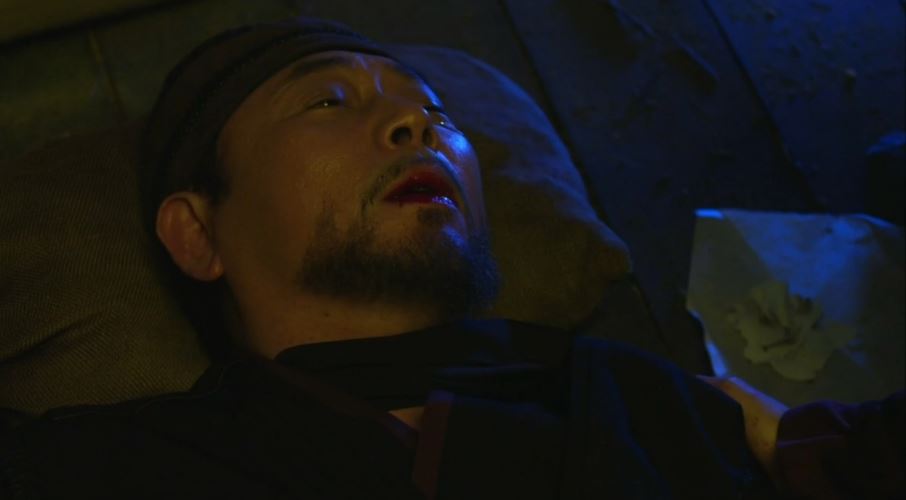 I continue to be in awe of the pace at which this story is unfolding. There’s something so refreshing about how nothing gets dragged out for ages. The last time I tried to watch a 50-episoder, it circled endlessly around the same two plot points until I finally gave up in despair around episode 30. But Flower in Prison blazes onward, confident in the breadth of its characters and the many layers of its plot. I’ve watched far shorter shows that weren’t able to cover the same amount of ground in their entire run that Flower in Prison has sped through in seven episodes. 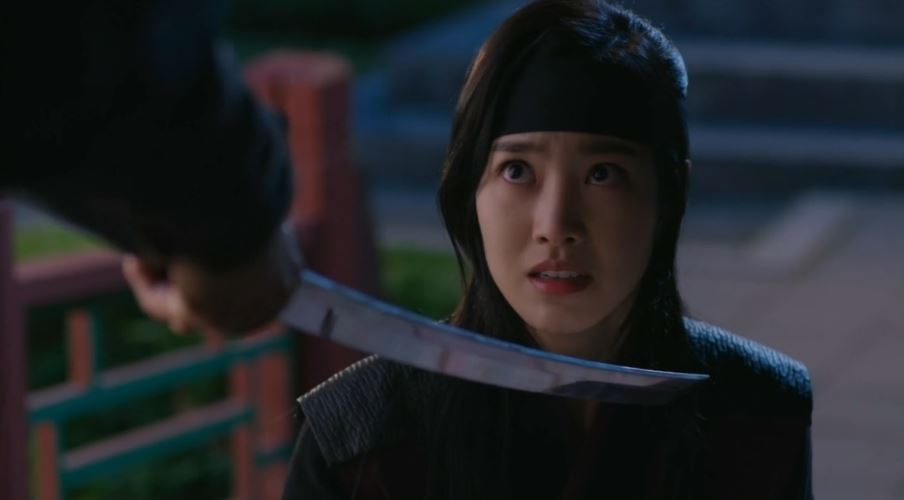 Another thing I’ve found refreshing is the fact that Ok-nyeo gets to occupy the traditional hero’s spot without the audience having to sit through justifications for her presence. (It reminded me a lot of this essay about Rey in The Force Awakens, and how her gender was never framed as something that might keep her from being the central focus.) Ok-nyeo’s plot threads and character beats are virtually identical to any sageuk hero’s, from the need to avenge a parent to having someone mentor them in badassery. The only thing I can think of that would possibly have to be changed so far if Ok-nyeo were male would be for male!Ok-nyeo to attend the police trials instead of the damo trials, and even then, he could still be rejected by humiliating some pompus nobleman with his superior skill or something.

Ok-nyeo is the hero of the story, without qualification or caveat, and her gender hasn’t limited her storyline or been treated as an obstacle for her to overcome. And honestly, that’s so damn fun that I am more than happy to overlook a lot of things I would otherwise be less forgiving on. Please don’t force me to take this back later on. 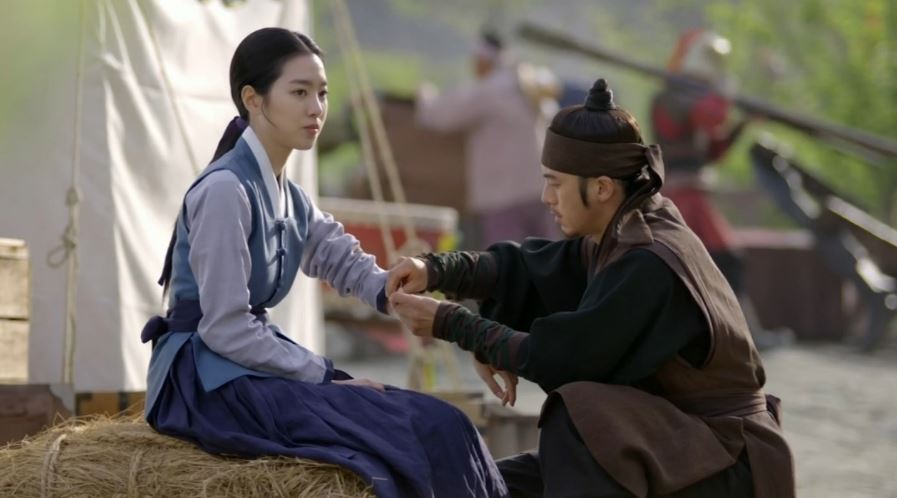 I wasn’t the only one who made irritated faces at the decision to not cast a younger version of Tae-won like they did with Ok-nyeo, but the thing that saved that for me both back then and now is that absolute lack of any romantic spark between them. In the childhood episodes, Tae-won saw Ok-neyo as a prison official he could bargain with to inflict grievous bodily harm upon someone achieve his goals, and Ok-nyeo similarly used him. Even now that they’re both older, Tae-won continues to treat Ok-nyeo as a younger kid he needs to look out for. That “skinship” above? Played out a lot more like “you’re bleeding kid, sit your ass down and let me patch you up” than anything romantic.

And frankly, now that Tae-won unmasked Ok-nyeo and is likely feeling rather betrayed (but he won’t come back completely ruined, will he?), I can’t imagine any romance starting between them for at least another week or two. Even if Ok-nyeo did spare his life. 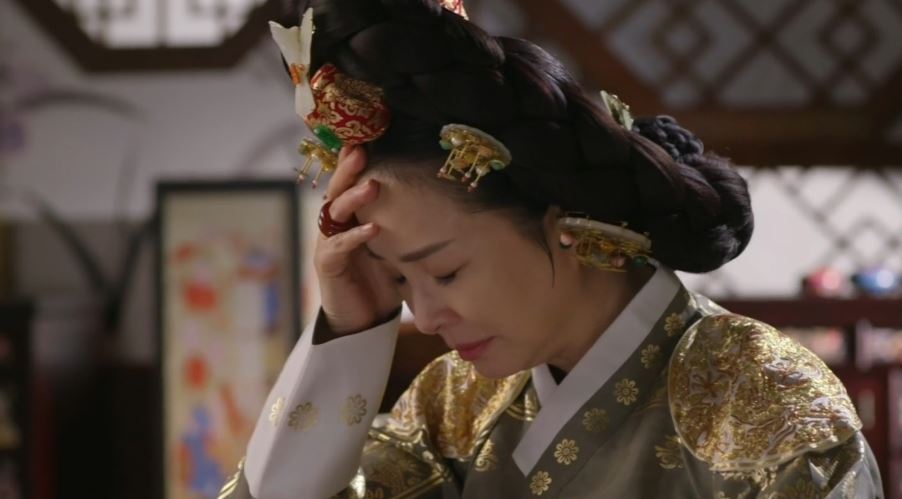 Speaking of lives, I doubt anyone was surprised by Tae-soo getting betrayed. Won-hyung isn’t exactly the most subtle of villains—and I’m excited for this break in the ranks among the villains. What will Queen Dowager Munjeong do once she finds out that her younger brother betrayed and lied to her and ordered her secret lover Tae-soo killed? (He’s not really dead, is he?) I don’t know, but the possibilities of the bad guys fracturing makes me exceptionally happy.

I definitely need to start awarding Nan-jung villain points, though. She is one-hundred percent contemplating killing the as-yet-unseen Gook-dong (Won-hyung’s first wife) in order to take her place and keep Shin-hye from being stuck with the label of concubine’s daughter. Just be a good villain, that’s all I ask. Make the good guys tremble at the thought of facing you.

The other person I’m starting to award villain points to is Sun-ho. What are you doing, obeying orders to keep something secret from the Queen Dowager, huh? Shouldn’t you owe more of your allegiance to her than Won-hyung? (That’s okay, the Munjeong doesn’t need you, she has the loyal Choon-soo on her side.) And you let your buddy stab Tae-soo and left Ok-nyeo behind to fend for herself and then you’re going to frame her to hide who really killed Won-hyung. 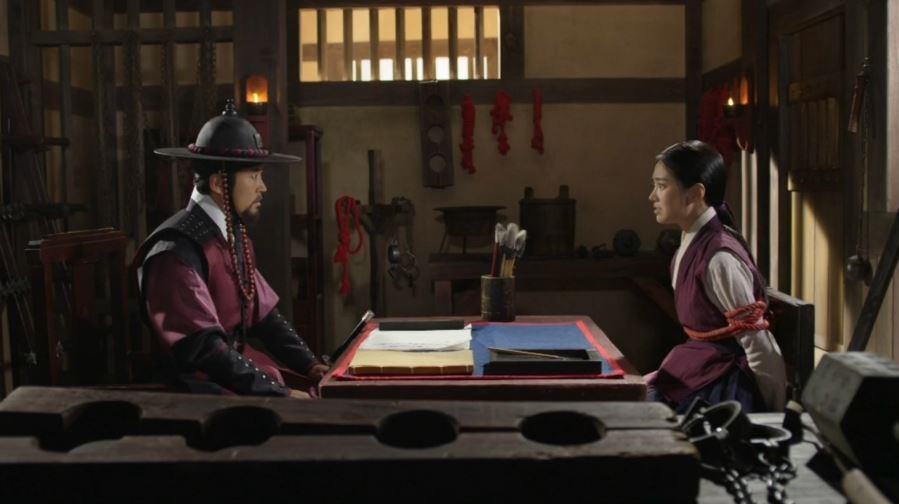 You’ve failed 95% of your tests of character, sir. If you can’t keep Ok-nyeo from getting murdered by a grieving queen, then I’ll be tossing you on the irredeemable pile.